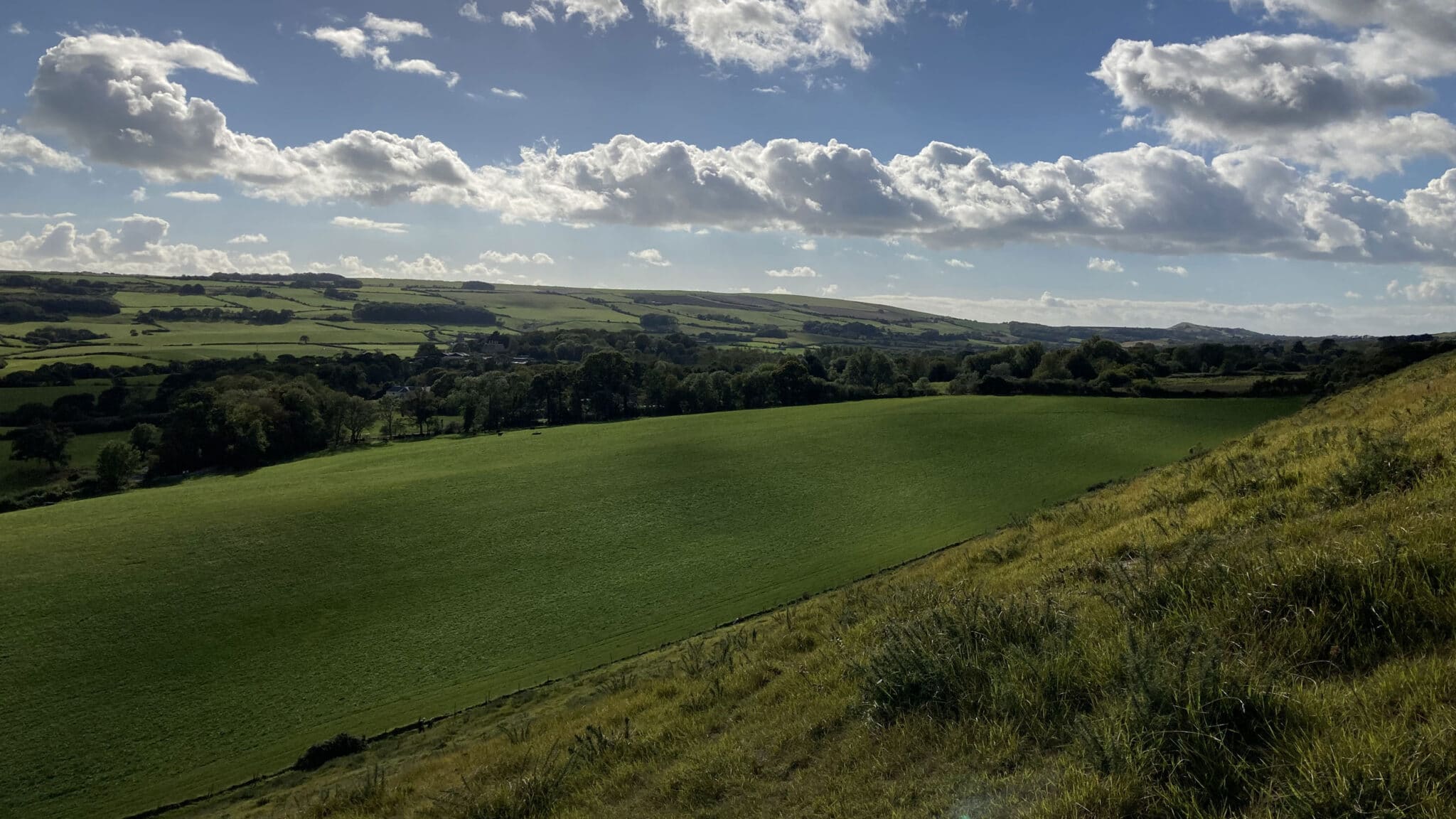 Walks with my Dog, 1 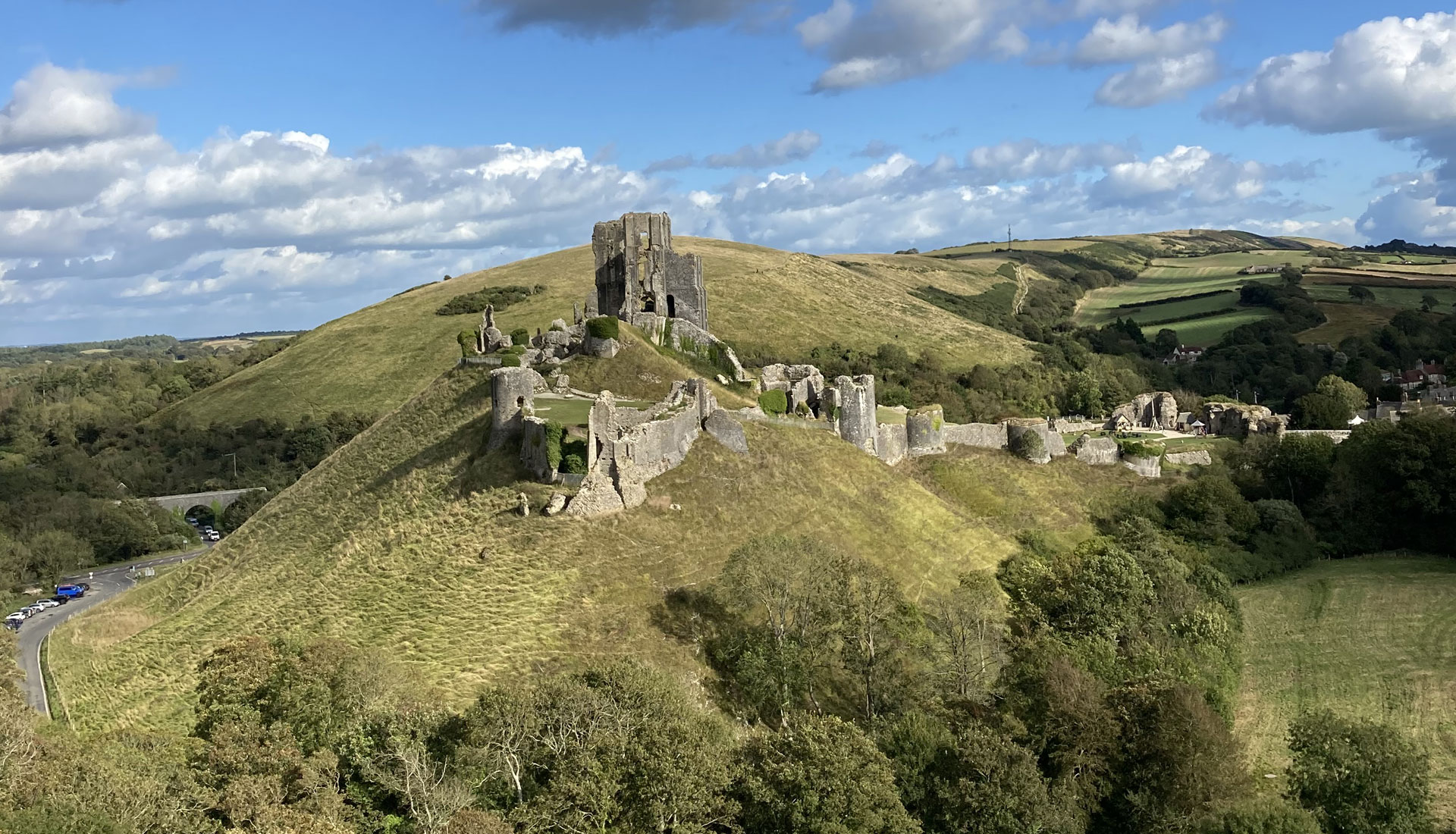 The inaugural walk of Ned, the field spaniel, and myself, began with an auspicious start. The heavy rain which had drenched much of Dorset for the preceding four days cleared long enough for our first walk at Corfe Castle. Raincoats stowed in the backpack the sun warmed the October air as we moved away from the ruins of Corfe Castle. Facing the small bridge which borders the river and takes you either right to the National Trust car park or left towards the rolling hills of Purbeck. Today we went left.

Moving through the gate we moved right, along the gently sloping path which borders the top of the field and moving through the treeline with tantalising glimpses of Corfe Castle to our left until I stopped suddenly. The air was alive. Small birds darted up and over, moving without difficulty over the gorse and grass around me, along the line of the hill and out over the field towards Corfe. If we had been in that field we certainly would have missed them. Moving en masse, in a beautiful dance they were too small to see at any distance and so we had come upon them abruptly. The air alive with movement, dog and birds ignoring each other as I stood open mouthed and trying to figure out if they were swallows (tails too short)? So, they must be swifts? Swifts. Okay. This delusion lasted until I was able to look it up at home and discovered the flash of white on their belly belied them to be sand martins.

The RSPB site lists describes sand martins as gregarious in the breeding season and winter. Gregarious here means loving of company and socialising together. Even though the creeping tinge of autumn colour has just begun to shroud the countryside they were certainly gregarious. The large swarm moved independently of each other but never moved far from one and other. It looked as if they were showing off – dancing for themselves as part of the group, showing what they could do and how swiftly they could dodge and dive through the sky. Cleaving the horizon apart.

We stood there for some time. The noise of the road in the background paled to insignificance compared to the ever-flowing number and movement of the birds around us. Haloing the sky and reaching towards the vista of Corfe before doubling back. Pulsing through the air.

Eventually I tore myself away and moved along the path towards the intersection of the field and the woods. Looking up, along the face of the hill a white scar of exposed chalk bed belied the path taken by other walkers and cattle. We moved along it, past the sharp teasles, the warmth of the day easing the steep climb up and the moving clouds casting Corfe Castle into shadow and relief by turn. Ned trailed behind sniffing and learning the new smells whilst I stretched my legs, pushing further up the hill with Corfe Castle to our left. The open expanse of the hill allowed the arrival of others to be signalled in advance and inch by inch the couple and their dog approached us. The narrow path offered only steep edges to step into and as I looked down the ground moved with the purposeful dip and jag of slight little wasps moving in and out of their holes in the ground.

Stood on the face of the hill Ned desperate to play or be cuddled we spoke about dogs and whether he was small or big for his age before I gently persuaded Ned to follow me once more up the hill. We reached the summit and Purbeck rolled out before us. Shadows dancing across the hills as the clouds scudded across the sky.

We slowly began the descent, steeper this time for the lack of a path until suddenly wooden steps appeared in the hill before us. Wonkily we made our way down the hill, Corfe Castle ducking in and out of view and the village stretched bare ahead of us. Small purple flowers peeped out from the base of the stairs somehow surviving the movement of feet which had surely trammelled the route in the summer.

Finally, we reached the base of the hill and made our way back slowly towards the village.

Walks with my Dog, 1 Gallery