What is Community Rail?

Community rail is all about ensuring communities get the most from their railways. Working alongside local, regional and national partners, as well as train operators and rail infrastructure owners, community rail partnerships and groups around the country aim to play an important role in social inclusion, community wellbeing, and economic development, and promote rail as a key part of sustainable, healthy travel.

The value of community rail

There is evidence of community rail delivering social, economic and environmental impact in a wide range of ways, adding value at a local level and supporting national strategies.

Community rail promotes understanding, confidence and positivity around rail, thus removing barriers to travel, and there is evidence that community rail partnerships help to attract new passengers and this very often leads to repeat business.

Community rail also has an important role to play in engaging the community in planned improvements, by commenting on proposed changes to services and infrastructure put forward by partners from the Rail Industry.

Community rail is evidenced to deliver significant economic value more than covering the investment put in. Community rail partnerships and station friends groups are ‘low-cost, high-value’, with partnerships paying for themselves. Volunteer activity nationally is calculated to be worth £5.6m annually in terms of their labour contribution, plus anything up to £27.6m in social value to community rail volunteers themselves.

The way community rail has connected railways with local people is a great success story. Volunteering is a key element, carrying benefit to the railways, passengers, local people, and volunteers.

Another big part of community rail is working with schools, colleges and youth groups, increasing confidence and understanding about the railways, supporting mobility and opportunity, and encouraging sustainable and healthy travel.

Community rail partnerships are increasingly focused on engaging diverse groups, particularly those who face difficulties accessing rail or are socially marginalised. Case studies show the impact of such work on people’s lives.

Community rail can be a catalyst for bringing partners together to work towards physical, economic and social regeneration. This includes a growing number of community station projects where redundant or dilapidated stations buildings have been transformed into attractive gateways and hubs for the benefit of the community. An example of this is the proposed community hub at Wool station, using funding from SWR’s CCIF award. 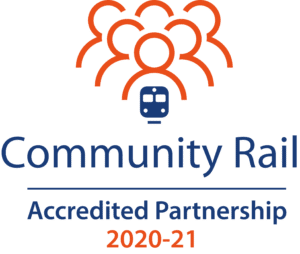 Background Information of the PCRP

The PCRP has its roots in the campaign to re-open the Wareham to Swanage branch line which was closed by British Rail to passenger traffic in 1972. A vigorous society was formed to make the case for re-opening and the local authorities at the time decided to purchase all of the land south of Furzebrook to ensure that it was not subjected to piecemeal disposal and development. This was a very important step as it enabled discussions with the still-young Swanage Railway (SR) to continue, pending the making of a case for re-instatement. However, during 1972 BR had removed most of the track and other infrastructure, making re-instatement as a railway all the more difficult.

A report by Coopers Lybrand in 1980 on behalf of Dorset County Council (DCC) proved the turning point in discussions, following which SR was given the first of several successive short leases to enable the reconstruction of the line from Swanage to Furzebrook, where the BP oil sidings were located.

By 1997, SR had relaid the track and installed associated signalling northwards from Swanage, as far as a new Park & Ride car park at Norden, just north of Corfe Castle. SR’s attention then turned to re-connecting with the mainline to Worgret Junction, a mile west of Wareham station. This part of the project required detailed discussions with the national infrastructure owner, Railtrack, whose Dorset Coast Re-signalling Project was planned to take place in 1999, including the line between Wareham and Worgret Junction.

It had been known for some time that the most economic and thus achievable opportunity to re-signal locally for passenger traffic would be at the time of signalling renewal on the Poole to Weymouth main line, so the first meeting of the Purbeck Rail Partnership (later to be re-named Purbeck Community Rail Partnership) was held in 1997, as a forum for discussions between SR, DCC and Purbeck District Council (PDC), to identify the scope of work needed, to estimate the costs, and to try to find a way to fund that work.

In the event, Railtrack did not proceed with the re-signalling in the local area in 1999-2001, and this element of the scheme was deferred until 2008, under the auspices of what had by then become Network Rail.

In 2010 the then Dorset County Council and Purbeck District Councils made the momentous decision to fund the extra costs of the re-signalling scheme associated with the elements needed to enable passenger trains to operate again between Swanage and Wareham. This included alterations at Wareham station to give much needed extra flexibility to train operators, as well as the cost of installing a new cable to connect SR’s Corfe Castle signal box with NR’s Basingstoke Area Signalling Centre. The new signalling was commissioned in 2014. However, some elements of the scheme, at Wareham, have remained un-commissioned due to issues with the foot crossing at the London end.

In summer 2017 a 60 day trial service was operated by West Coast Railway on behalf of SR, using hired-in locomotives and carriages. This trial gave SR some invaluable data which has shaped that company’s thinking since.

In August 2017, the Department for Transport awarded the franchise in the local area to South Western Railway. Thanks to colleagues at DfT the new franchise included PCRP as one of the eight CRPs to be funded in the new franchise. As a direct result, PCRP was able to appoint its first Community Rail Partnership Officer, Kelly Marshall, who commenced work at the end of January 2019. Another outcome of this change was that PCRP’s area of involvement was formally agreed as being all five of SR’s stations (Swanage, Herston, Harmans Cross, Corfe Castle, and Norden), plus the four on the SWR network which are within the Purbeck area (Holton Heath, Wareham, Wool, and Moreton). 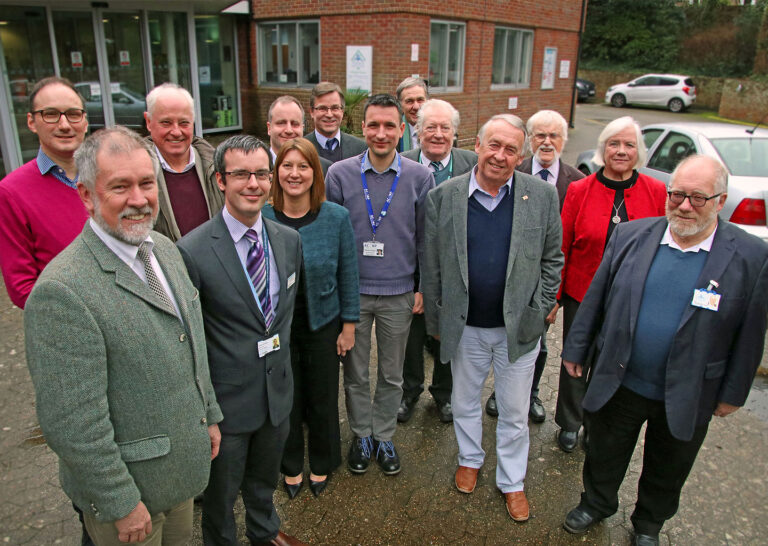 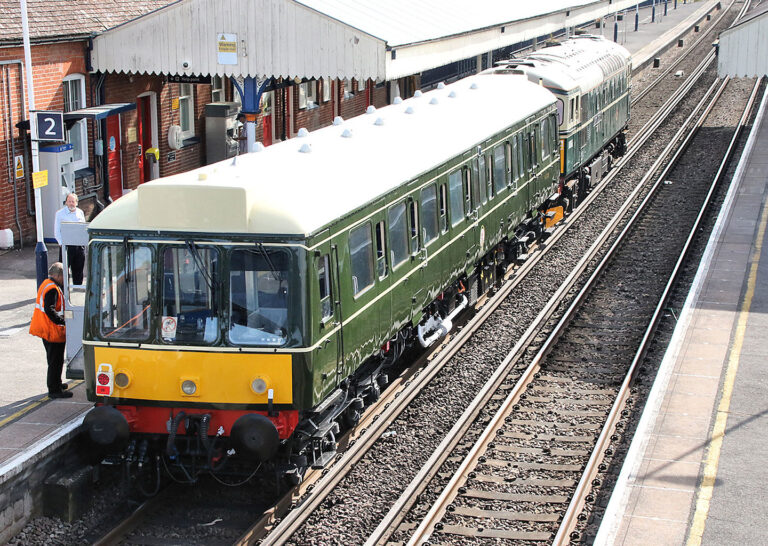 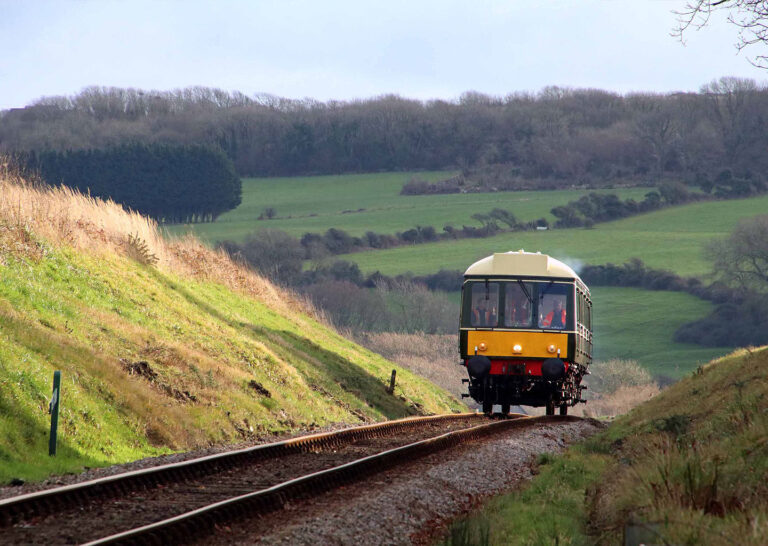 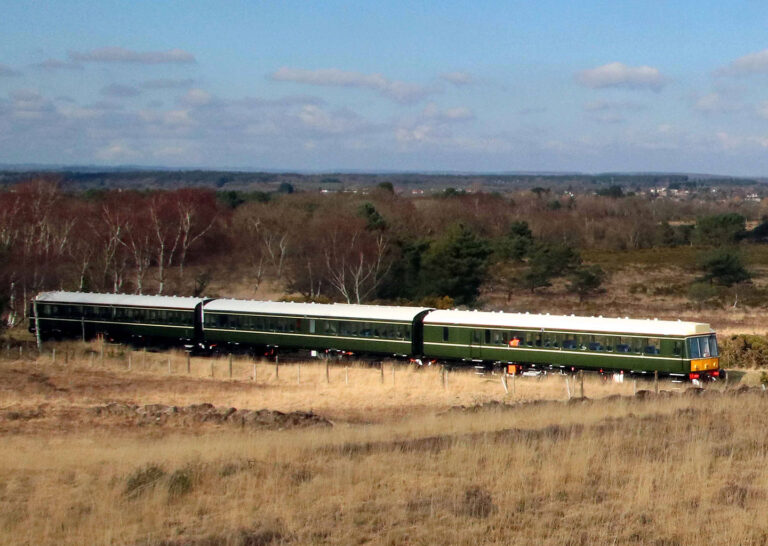 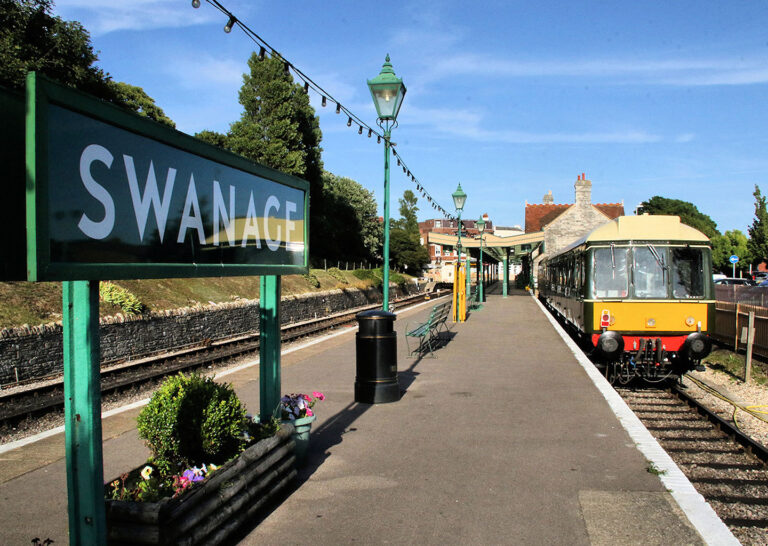